On 26 November 2008, terrorists launched a series of devastating attacks on the Indian city of Mumbai. The attacks lasted three days and descended into a deadly game of cat and mouse as the gunmen stalked the streets of Mumbai, and the corridors of the city’s hotels, shooting people both foreign and local. But what separates the Mumbai attack from other terrorist attacks, was how social media was utilized, both by those hiding from the violence and those causing it.

As the attacks began, social media sites such as Twitter became inundated with messages from those caught up in the violence. At the time, CNN estimated that 80 messages, or “tweets,” were being sent to Twitter.com via SMS every five seconds, providing eyewitness accounts and updates.

Social media devices were also being used by people hiding in hotels to find out what in fact was going on. Whilst many heard gunfire, few knew what was going on and, as such, Blackberries and mobile phones became the sole source of information.

SMS to friends and family asking for help and updates led to information that was invaluable at the time. Anthony Rose was part of a film crew trapped in the Taj Mahal Hotel when the attacks began. During the attacks, one of his crew members texted his mother informing them what was going on. In response, his mother sent him floor plans of the hotel so that the film crew could find their way to safety. The entire crew were able to eventually climb out of a window to safety after six hours of barricading themselves in bar.

The terrorists’ intentions were also made clear thanks to the deluge of news information spread around the world. Alex Chamberlain, a British national, who escaped from gunmen under the cover of heavy smoke, had heard the terrorists singling out UK and US nationals from groups of hostages. Upon his escape, he told local news stations that the gunmen were targeting foreigners.

As such, this was picked up all over the world and other hostages, barricaded in their rooms, soon learnt of this. US national Michael Pollack was hiding in The Chambers, a section of the Taj Mahal Hotel, with several hundred other people. Upon learning this news, he told his Indian born wife Anjali, that if terrorists came she must not stand with him in order to save her own life.

Images of the attacks were tweeted within minutes. The first images of the terrorists were picked up by blogs and social networking sites and rapidly spread around the world, more rapidly than mainstream news stations.

However, they weren’t the only one tuning into the news to find out the latest.

As the news reports were beamed all over the world, the organizers of the attacks, who were based in Pakistan, were also watching the news. As such, they were able to learn where people were hiding and direct their gunmen their accordingly over the phone or via Blackberries.

Unfamiliar with the city, the terrorists reportedly navigated their way through Mumbai using Google Maps and other mapping sites. Communicating with their base via satellite and Voice-over Internet Protocol (VoIP) to avoid giving away their locations, as well as constantly changing their phones, the gunmen were able to stay mobile and with the constant breaking news, updated on where their targets were hiding.

One chilling example occurred, when an Indian politician gave a phone interview to a local news station, whilst hiding in The Chambers, along with The Pollacks and hundreds of other people.

This interview was rapidly picked up by other news stations and before long, the Lashkar-e-Taiba handlers had relayed the information to the gunmen. One phone conversation that was recorded by security forces, shows the handlers telling the gunmen where a large group of foreigners were hidden, along with a local politician. The gunmen were heard describing it as ‘the icing on the cake’.

When the gunmen arrived at the Taj Mahal Hotel, staff members were leading people out. There was a stampede as the gunmen opened fire and people fled back into the hotel barricading themselves in rooms, The Pollacks included. They were eventually rescued by Indian commandos 12 hours later. 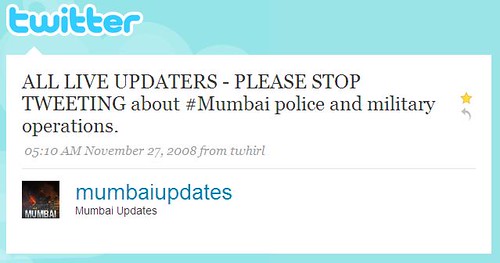 As a result of such blunders, the Indian government rapidly posted its own tweet saying, “Indian government asks for live Twitter updates from Mumbai to cease immediately. ALL LIVE UPDATES – PLEASE STOP TWEETING.”

The fact that the terrorists may have been using Twitter to gain information about where people were hidden, led to numerous ‘tweeters’ posting abusive ‘tweets’ urging the terrorists to ‘die, die, die.’

The use of mobile devices by the terrorists and their application of social media, meant they were able to coordinate their actions to a very sophisticated degree. After the attacks, FBI spokesman Richard Kolko said at a recent forum on crisis communications in Washington, DC, “They were well planned and well prepared. They were experts in communications as well.”

“Every time the bad guys shot someone and killed them, they just picked up the cell phone and used that one, interestingly enough,” he said. “It became part of our investigation. Which phones were these guys using? Well, it turns out they were using phones from all over the world, which made it more complicated for us. As their batteries died, they would just use victim’s cell phones.”

The fact that the terrorists used Blackberries during the attacks was picked up by a lot of news outlets, with many almost reporting the story in disbelief. However, the fact that they were using smart phones shows how far technology has come and how mainstream social networking and mobile communication is.

A communications expert summed it up at the time saying to an American news station, “It (a Blackberry) is not extremely high tech… so governments need to assume terrorists would have access to the technology at least that most people have access to if they don’t presume they have access to better technology.”

The 60-hour siege almost became a ‘social media experiment in action’ as both hunter and hunted used the internet and mobile devices to gather as much information as possible.

It showed what terrorism in the digital age could be capable of – real-time information and a flood of updates whilst on the move.

Without the level of high technology the terrorists had, the attacks would have been far less devastating. They were able to use sophisticated GPS navigation tools and maps to find their victims, however technology also saved countless lives as the public sent text messages to relatives and friends trapped in hotels in order to provide them with the best information possible, in order to survive.

Confidence is an online researcher, passionate about business and entrepreneurship, with a feel for writing and a general love for the digital culture.